In honour of my first article being published in print (instead of just early access), I’ve written this little post is to help explain my research to anyone out there who is just interested in what I do! My intention is to take my first first-author paper (found here) and talk through it in broad, understandable terms. In the future I’ll do this for all my papers but for now this is the only one that’s published and worthy of such efforts.

Starting with the title, this is a very informative sentence providing you’re quite well-versed in the field of neuroimaging, motion perception, and neurostimulation. If not, then it probably reads a little strange(!). In essence it’s describing that we’ve managed to determine functional differences between two areas in the brain characterised by their preference for contributing to our perception of moving scenes. These areas (MT/TO-1 and MST/TO-2) are contained within a little region of the brain called human V5/MT+ (1). We have two of these regions, one in the right hemisphere and one in the left, and they can be found in the ascending limb of the inferior temporal sulcus (fold), or roughly speaking, a couple of centimetres behind and above your ears (2). 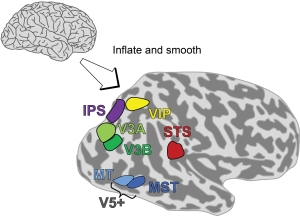 Now, in everyday life, if we had two whisks for example, we might consider giving one away because it’s a waste of cupboard space to have two items that do the same thing, and the same principle applies to brain areas. It would be a waste of precious cortical space to have several visual areas processing the same aspects of the visual world, so if it seems that we have two visual areas that process moving scenes, then it’s a safe assumption that they must be analysing slightly different aspects of the movement. This means we can assume a functional difference without even investigating it, but then proving it is the tricky part…

Now, in order to determine what neurons are processing, we can use neuroimaging techniques such as functional magnetic resonance imaging (fMRI). This works by measuring changes in the level of oxygenated blood in the brain under the assumption that much like muscles, if exerted, more energy needs to be sent to help them to work. If a population of neurons are being used in a particular task then, the heart will need to send more oxygenated blood to replenish the exertion. Previous studies have used this technique to great success and found tentative evidence that both MT/TO-1 and MST/TO-2 respond to different directional stimulation e.g. upward/downward (translational) motion, expanding/contracting (radial) motion, and clockwise/anti-clockwise (rotational) motion, but that perhaps MST/TO-2 shows more preference for the more ‘complex’ radial and rotational stimuli (3-4).

“Why is this interesting?”, I hear you ask…

So although using fMRI is the gold-standard approach and is an incredibly informative method for determining what our brains are doing in vivo (while we’re still alive!), our issue here is that we’re just correlating (that is, inferring a relationship between) the increase in oxygenated blood in MST/TO-2 with the presentation of some complex moving stimuli. In an ideal scientific world we seek causal (determining cause and effect) evidence as opposed to correlational. One way of achieving this is to use a technique called transcranial magnetic stimulation (TMS), which (without going into bags of detail) temporarily disrupts the normal cortical functioning of small areas of the brain underneath the ‘coil’ used to apply a magnetic pulse (5). These pulses are very brief and if localised correctly, for example, if we positioned it over MST/TO-2 in someone, then we can design an experiment to test which tasks the participant becomes poor at when they don’t have appropriate use of the MST/TO-2 region. 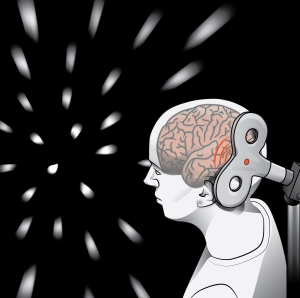 This approach is exactly the design of our experiment, so our aim was to determine the function of MT/TO-1 and MST/TO-2 by applying accurately localised TMS to these regions of the brain in separate trials whilst participants performed various direction discrimination tasks involving translational, radial, and rotational motion.

Ultimately we found that when we apply TMS to MT/TO-1 participants seemed to struggle with identification of translational (up/down) motion but they remained experts at identifying radial (expanding/contracting) and rotational (clockwise/anti-clockwise) motion. However, when we applied TMS to MST/TO-2, participants struggled with the translational motion task as well as the radial motion task.

This suggests that MST/TO-2 is in fact more specialised for these expanding/contracting stimuli than MT/TO-1 which the literature proposes may be linked to our perception of the world moving around us as we move forwards/backwards through it (6). This not only supports the theory that MST/TO-2 might be hierarchically higher up the visual processing pathway than MT/TO-1, but also as both areas seemed to be involved in the perception of translational motion, perhaps MT/TO-1 feeds this signal into MST/TO-2 for further processing… Only further experiments will reveal whether this is the case or not!

So, next time you’re running down a corridor, you can take special note of how the environment appears to be expanding around you as you move forwards and you can think to yourself “hey, my MST/TO-2 region is working really well right now”.

View all posts by samstrongvision